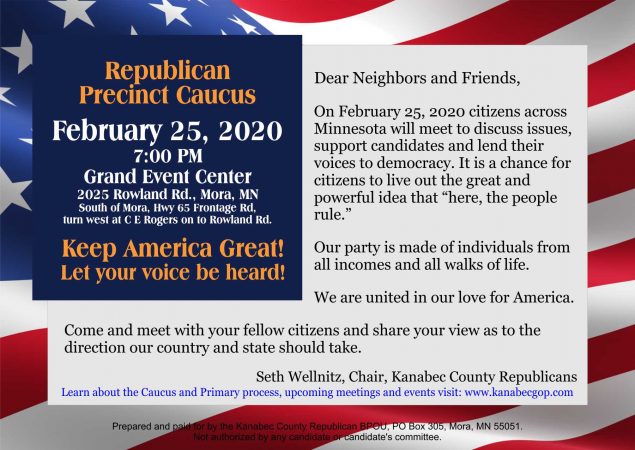 Never been to a caucus? Not sure how it works? Learn more about the process below!

Precinct caucuses will be held February 25, 2020, one week before the Presidential Nomination Primary. A Caucus Finder will be available in early February.

We encourage Minnesotans to show support for their preferred candidates by participating in the candidate endorsement process that leads up to the state party conventions.

It all begins on Tuesday, February 25, 2020 with the precinct caucuses. Going to a caucus is a great way to show support for a candidate, raise an issue that’s important to you, influence who the party will endorse for many offices, and meet people in your community.

WHEN AND WHERE WILL 2020 PRECINCT CAUCUSES BE HELD?

The 2020 precinct caucuses will be held on Tuesday, February 25 at 7:00 p.m. at locations set by the parties. (The Kanabec County Republican Caucus will be held at the Grand Event Center, 2025 Rowland Rd., Mora, MN)

WHAT IS A PRECINCT CAUCUS?

Precinct caucuses are meetings run by Minnesota’s political parties. They are the first in a series of meetings where parties may endorse candidates, select delegates, and set goals and values (called party platforms).

WHO CAN PARTICIPATE IN A CAUCUS?

To participate, you must be eligible to vote in the November 2020 general election and live in the precinct. You also must generally agree with the principles of the political party hosting the caucus.

WHAT HAPPENS AT THE CAUCUS?

Each political party runs their caucus meetings a little differently. Check with your political party if you have specific questions. Generally, there are three main activities at a caucus:

When will the presidential nomination primary take place?

Will all parties participate in the presidential nomination primary?

Will all parties be on the same ballot?

No, each participating major party will have a separate ballot.

Who decides which candidates will appear on a party’s ballot?

What if a candidate drops out before the primary?

Once a party’s list is submitted, changes will not be made to candidates that will appear on the ballot.

Will there be a place to write in a choice or vote for “uncommitted”?

Only if it is requested by the party chair. Party chairs will need to submit names of write-in candidates to be counted seven days before the primary.

Will any other offices be on the ballot?

Who can vote in the presidential nomination primary?

Any voter registered in Minnesota. Voters can pre-register through February 11, or register at the polling place when they vote. Note that voters must turn 18 years old by March 3 to vote in the presidential nomination primary.

How will I be able to vote in the presidential nomination primary?

Will other people know which party’s ballot I request?

A voter’s choice of party ballot will be recorded and is private data. However, a list of who voted in a presidential nomination primary and the political party each voter selected will be provided to the chair of each major political party. How a voter voted on the ballot will be secret.

Will parties have to abide by the primary results?

The presidential primary results must bind the election of delegates in each party.

Who will pay for the presidential nomination primary?

County and municipalities will be reimbursed by the state for the primary costs.

How much will the primary cost?

The Office of Secretary of State surveyed all 87 Minnesota Counties and, based on that survey, estimates that the cost to administer the Presidential Nomination Primary will be $11.9 million. The Secretary of State has certified this estimate to the Commissioner of Management and Budget. Counties and municipalities will be reimbursed for their costs of administering the Presidential Nomination Primary following the election.

Will there still be precinct caucuses?